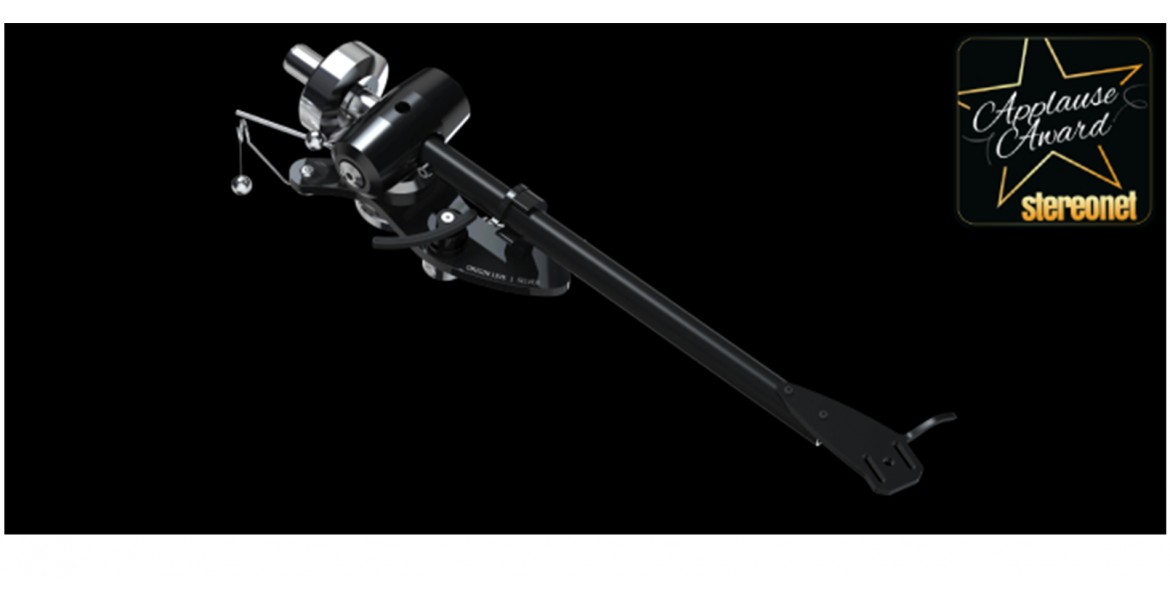 The story starts way back in 1983 when Rega Research launched its new RB300 tonearm.

Previously, it had been fitting its version of the Japanese-sourced, S-shaped Acos Lustre arm to its Rega Planar 2 and 3 turntables – and, if you’re being pedantic, the original Rega Planet too.

Then, in the early eighties, Rega designer Roy Gandy came up with an ingenious one-piece cast aluminium armtube that was far stiffer and less resonant than practically every S-shape on sale, and the rest, as they say, is history.

The RB300 was hugely successful. Originally selling for £90, it outperformed most arms at three or four times the price – and soon became ubiquitous on mid-priced turntables.

Yet, it wasn’t perfect, and people began to modify them.

One worthwhile upgrade was better wiring, but it wasn’t until the late nineties that Origin Live’s Mark Baker realised that one of the major impediments to the arm sounding seriously good was the rear end stub.

He came up with a modification to this that was simple, cheap and delivered a great fillip to its sound, then duly offered it for a fixed-price fee.

It really took off, and one of the people who loved it was yours truly.

When reviewing it, I compared the OL-modded Rega to some seriously high-end arms and found that it wasn’t the walkover that many expected.

The resonance reduction seemed to give the Rega arm a much cleaner and purer sound and was better in the time domain, too – to my ears, the OL RB300 flowed better, making more organic sounding music. The next logical step was for Mark to buy in new Rega arms, modify them to his specifications and then sell them.

This he did, opting for the RB250 rather than the RB300 because he believed – and still does – that the latter’s built-in tracking force spring has a deleterious effect on sound quality. Indeed he thought the cheaper version was actually a better all-round proposition to modify.

Soon after, he offered a new version with a new, bespoke armtube, mated to the stock Rega yoke and base; he called this the Silver 250 and launched it in 2002. What then followed was a dizzying number of new versions of the Silver.

I reviewed several of them over the years and almost lost track! Mark kept doing mods to it because, I suspect, he is a restless tweaker.

A formal naval architect, he’s fascinated by structures, resonance and rigidity – so experimenting with new versions of his best selling and (then) most affordable tonearm was likely a labour of love. The Silver Mk2 got new armtube material soon after; I remember reviewing it and being even more impressed.

Then a few years later the Silver Mk3, which lost all its last Rega sourced components; these were replaced by in-house designed equivalents.

The arm had, in effect, become a complete Origin Live tonearm in its own right.

Then, five or so years later, the Mk3A arrived, which sported a raft of component updates, using ideas trickled down from Mark’s high-end arm designs. “One of the huge advantages of manufacturing everything ourselves is that we can innovate very quickly and engineer components to avoid unnecessary machine time and work”, he told me.

“Innovation only happens in the manufacturing process, something politicians don’t seem to understand…”

BACK TO THE FUTURE

The Mk3A sold well for seven years until recently being replaced by the new – yes, you’ve guessed it – Mk4.

The latter looks identical to the arm it replaces but is very different under the skin.

Yet another new armtube is fitted, made from high-grade aircraft alloy, plus a couple of tell-tale changes like the slanted arm clip and single bolt (rather than its predecessor’s two) on the side of the armtube. As you’d expect, a high strength rear stub is fitted, which is said to improve counterweight stability in vibration.

The new arm has a special yoke design that takes very high precision bearings plus an integrated VTA adjuster, consisting of a threaded top nut above the armboard and a clamping nut underneath.

Overall build and finish for an arm of this price is excellent. There is less sign of cost-cutting than with the early variants of the Silver, for example, and the arm is very nice to hand cue.

Things have come a long way from that original Rega RB300, launched nearly four decades ago.

Back in the day, I used to gauge the quality of the Silver by how much better it was to a stock Rega RB250. I don’t think that’s so helpful anymore because the two arms (or their ancestors) sound so different. Mounted on a Technics SP-15 turntable, this new Origin Live arm really does sound natural; tonally, it’s less arid even than some high-end arms I’ve heard.

It was warm, sweet, mellow and butter-smooth, without a grain of harshness and no sense of artificial bite.

The stock Rega arms at this price seem a bit more tonally ‘grey’, whereas the Silver Mk4 was more technicolour in its nature.

That’s not to say that this arm adds colouration because it does not.

Whereas a classic SME Series III, for example, makes everything sound soft and fluffy, the Silver Mk4 is very much a neutral performer.

For instance, feed it a seventies rock album like Pink Floyd’s Wish You Were Here, and it tells you all about the famous recording studio it was produced at and the sixteen-track analogue tape machine used to record it.

Give it some DAT-mastered drum and bass from the nineties, and suddenly it gets super dry and forensic.

Nookie’s The Sound of Music wins no prizes for sweetness but has biting, lacerative transients that make you sit up and listen. This new tonearm carried these without complaint, making for a super-fast sound that had my feet tapping manically.

Timing is an area where this arm excels; its sound has next-to-no overhang, and the result is an extremely propulsive rendition of the music. The Redskins’ Lean On Me is a great piece of early eighties punk-tinged funk that can sound flat with most budget tonearms, but not so here.

The Silver Mk4 really got into the groove, catching the scratchy rhythm guitar work with aplomb and locking it on to the funky bass guitar work and old school, loosely tensioned snare drum strikes. The music lilted along, building up to a climax that was further augmented by the recording’s soaring brass stabs.

Another aspect of the arm’s performance that this track highlighted was its excellent low-level detail retrieval; an old RB300 that I have from way back when sounded hopelessly cloudy and vague by comparison. Indeed, feed the new Silver Mk4 a challenging piece like Dance on a Volcano by Genesis, and it veritably scythes through the mix.

The album which it kicks off – Trick of the Tail – is one of those recordings that keeps getting better, the higher quality your system is.

Budget arms make it sound congealed, stodgy and muddled, but the Origin Live was superb. It unpeeled layer after layer of information, from back-of-the-mix reverb to simple nuances of Phil Collins’ vocals which are easy to miss through middling front ends.

The overall effect is quite a thing to hear; there’s no sense that you’re listening to a tonearm of this modest price, or anywhere near it. I’ve reviewed most of its close rivals over the years – from Michell’s great value TecnoArm to Roksan’s lovely Nima unipivot – and the Origin Live Silver Mk4 beats them all, to my ears.

Whether you’re tracking a budget Audio-Technica VM-95E moving magnet or a mid-price Lyra Delos moving-coil, this will make a very nice noise. Indeed, only some aspects of the arm’s set-up and presentation remind us that we’re anywhere near the cheap seats; things such as the VTA adjuster doesn’t have the silky precision of high-end arms, and whilst the hanging weight bias system may be elegantly simple, it doesn’t feel as luxurious as some.

The packaging isn’t as lavish as perhaps it could be, and some may find the styling utilitarian. However, these are all nit-picking niggles as when all is said and done, this is a great value design – just like the original Rega was all those years ago.

David started his career in 1993 writing for Hi-Fi World and went on to edit the magazine for nearly a decade. He was then made Editor of Hi-Fi Choice and continued to freelance for it and Hi-Fi News until becoming StereoNET’s Editor-in-Chief.