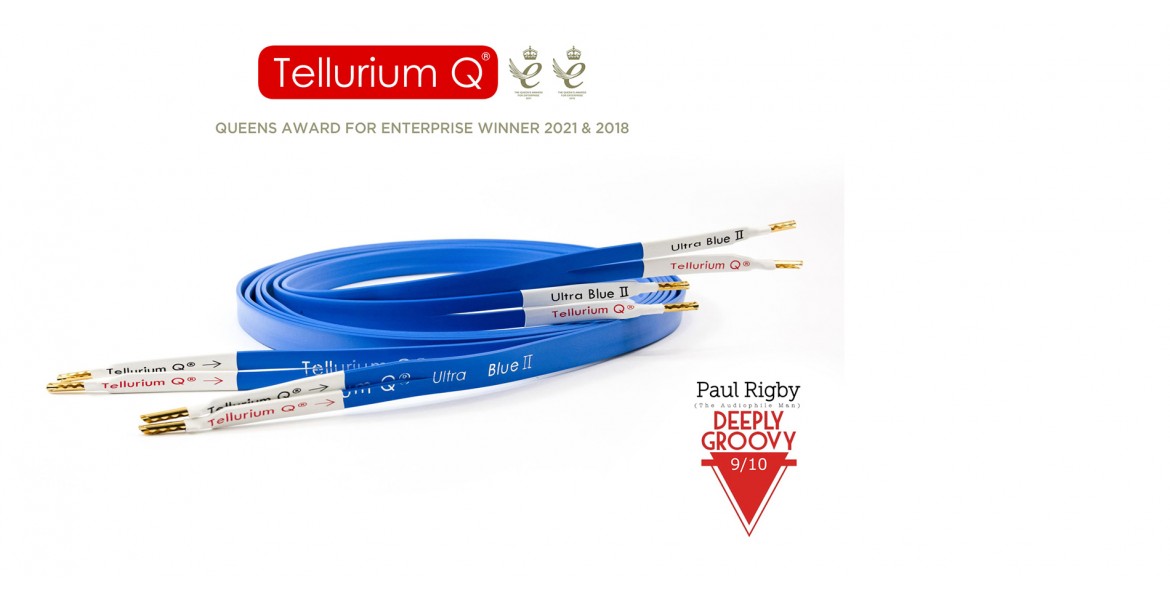 Paul Rigby reviews a possible contender, the latest version of the Ultra Blue IIs Tellurium Q has a range of speakers cables out and about, nowadays and all colour-coded and tweaked.

As ever with the company, they keep tight lipped in terms of technical details but that’s ok.

It’s the sound quality I’m really interested in, to be honest.

That’s reflected in terms of price, of course. If, indeed, you have a lower-priced suite of cables, let’s say you have something between £0 and £100, then the Ultra Blue II designs are an obvious possibility for those looking to upgrade.

Should you? Let’s find out.

I began the sound tests with Ennio Morricone’s orchestral soundtrack on the Cinevox, Metti, One Sera a Cena. I wanted to hear just what you’re paying for here.

The difference from a budget-level design to the next rung up the ladder should be a noticeable one so I drafted in my QED 40i speaker cables which can be had for around £90 or so for three meters from Amazon. So, roughly half the price of the Ultra Blue II designs then.

Of course, the Ultra Blue II cables should be superior but were they and, if so, by how much?

The QEDs offer great value for the price. Comparing the two was instructive.

What I heard from the Ultra Blue II cables that I didn’t get from the QEDs was a sense of maturity.

A rich palette of tones. A depth of detail. What really got me here was a sonic element that you tend not to really notice on this track.

That is, what struck first was something I normally couldn’t hear too much from he QEDs.

Ultra Blue II Speaker Cables From Tellurium Q This is an orchestral track, not hard-core techno.

Bass is a supporting player and not the star of the show. Yet it’s critical to the entire show because it provides a bedrock that the mids and treble lay upon.

Done well, bass on this track thickens the sound.

So while bass never dominated via the Ultra Blue IIs, what it did was add extra bulk and a rich layer that swelled underneath the music.

This added a sense of body to the music as a whole. A body that was largely absent from the QEDs. Perfectly understandable because of the QED’s price point.

This is the sort of thing you’re paying here.

You’re paying for the right to use the Ultra Blue II cables.

What the Ultra Blue IIs do is, in many ways, what the Audiolab 6000A does for amplifiers.

Adding bass to balance and the sound, integrating bass neatly into the music while never allowing it to dominant or become an independent force.

Bass adds a ‘sense’ of power here. The mids and treble also felt richer here. The amount of new detail though was the most significant aspect of their presentation.

The guitar strums added new detail. Again, there was a rich depth here.

An insight to the resonance created by the guitar body. A sense that this instrument was more than a set of strings, there was wood and metal around them.

Ultra Blue II Speaker Cables From Tellurium Q I was also interested to hear the control in the upper mids and treble.

Both the triangle and guitar during high-note plucks verged on the edgy via the QEDs but the Ultra Blue IIs added width and depth to these areas which meant that any edgy feeling receded, reducing listening fatigue.

Dynamic reach also appeared to be extended, something that was noticeable during the ride cymbal sequence.

Vocals were infused with emotion.

The Ultra Blue II cable’s focus and precision helped to reveal this area.

I then plugged in a pair of similarly-priced cables, the Python IIs from TCI and continued listening to the Ennio Morricone LP. What the Ultra Blue II cables did here was to open up the midrange offering a massive amount of new detail into the soundstage.

Remember that bit at the beginning of Sound of Music? Julie Andrews twirling around like the good’un on top of that mountain and even managing not to get dizzy and fall over?

That sense of uplift and joy?

That’s what the Ultra Blue II cables give you.

They are full of air and space.

Full of emotion in the upper areas of the soundstage.

There is a real sparkle from these cables that drags you deep into the music itself.

That is, the music tends to connect with you very easily from the Ultra Blue II cables. Ultra Blue II Speaker Cables From Tellurium Q Bass too manages to separate itself from the rest of the frequencies.

It never becomes dull or lacking in form.

The Ultra Blue II cables give bass a sense of solidity but they also push that frequency away from the mids and treble.

That doesn’t always happen in cabling. Especially at this price where bass can become an amorphous blob, stuck to the mids like Blu-tack and just as sticky.

So do the Ultra Blue II cables provide value at this price point? Absolutely, yes.

But why buy the new Ultra Blue II cables when you might be able to get a good deal on a pack of second-hand Ultra Blue I cables?

Wouldn’t that be the best of both worlds? Well look, if you can get yourself a good deal on a pair of Ultra Blue I cables then sure, go for it.

They are fine cables. In fact, I brought in a pair and did an A-B. A face off between the Ultra Blue I and Ultra Blue II cables, just to see what the comparison offered.

I thought the originals provided an equally impressive bass.

Great support, excellent separation from the rest of the soundstage.

A sense of strength and solidity and a fine momentum during the musical sequences that kept uptake pace.

Ultra Blue II Speaker Cables From Tellurium Q What the Ultra Blue I cables couldn’t handle though was the dynamic range.

Again, the Ultra Blue II had that inherent sparkle in its delivery.

An extra zip and flourish. Greater finesse, if you like.

That was down to the newly found detail that added character to the brass section body to the bank of strings and a rich nature to the backing harmonies. Frankly I just enjoyed listening to the Ultra Blue II cables more than the Ultra Blue I cables. Simple as that, really.

I then flipped to rock and a CD version of Thin Lizzy’s We Will Be Strong from the LP, Chinatown. What really hit me here – amongst the raucous noise – was the detail from the steaming acoustic guitar. It was never drowned by the thumping percussion, strong bass guitar or wailing lead guitar (a Snowy White presentation, on this LP).

The acoustic was almost delicate. Fragile even. Yet the acoustic guitar was wholly present.

Never masked, its detail was on show for all to hear.

Around this particular highlight, the Phil Lynott vocal was infused with silky portent.

Full of threat that ran alongside his trademark precision. He knew how to hit the letter ’t’ at the end of a lyric sentence, for example, and these cables where right there because of their inherent precision and focus. So the lead vocal never felt fuzzy or muffled, it was right on point.

Despite their technical prowess, these cables also know how to party.

So I partook in a smidgeon of that. Within reason that is.

Nothing too flamboyant. I am English after all