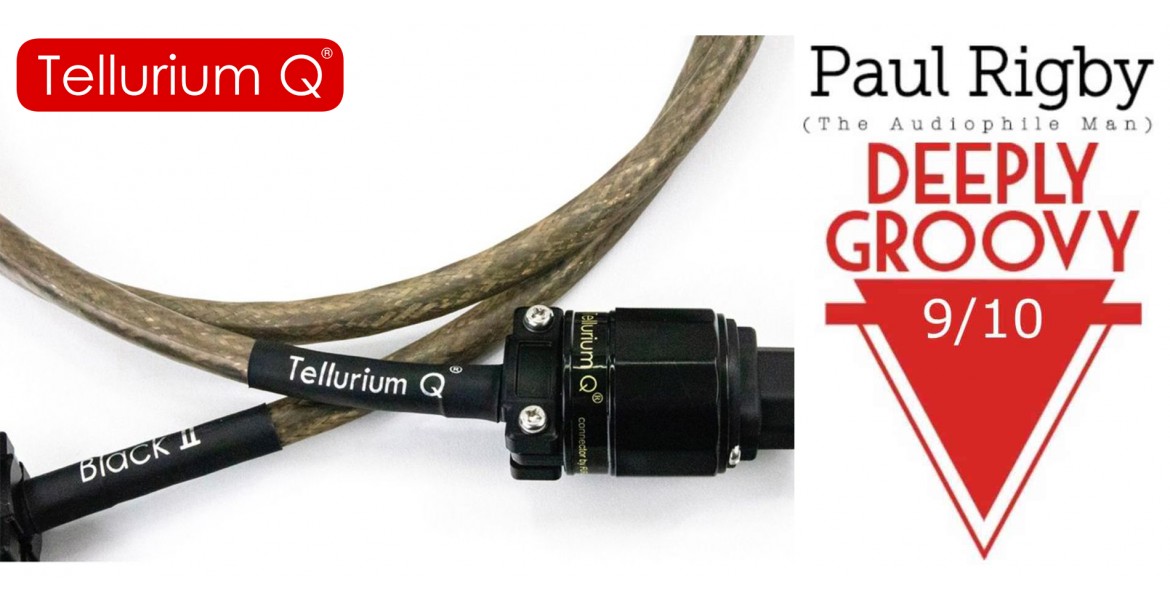 Although relatively lowly situated in the grand scheme of the entire Tellurium Q range (and a broad-based selection it is too), these Black II mains cables are nevertheless, high-end designs in price terms, exceeding the price of many other cabling ranges out there, in their entirety.

The Black II mains cables arrive in the Tellurium Q cabling range, just above the Ultra Blue II designs and just underneath the Silver mains cables.

As for their construction, design ethos and parts list, Tellurium Q is – as ever – keeping schtum. All you’ll find on their website is generalities while talking to the owner of the company and designer of these cables, Geoff Merrigan, you’ll hear inscrutable, Confucian-like musings. Which is great for a chat over a coffee but not of much use here.

Thus, as with all of my Tellurium Q reviews, the sound quality tests will have to speak for the cabling. Which is no bad thing, actually.

I began the following sound tests plugging the Black II into my two-box phono amplifier and then my pre-amp to test an Ennio Morricone soundtrack, Metti, Una Sera A Cena.

This track features a wordless female vocal backed by a full orchestra.

I then transferred the mains cable to the rear of my Benchmark DAC for a slice of New Order and the high-tempo synth pop, Regret from the CD, Republic, fronted by my Audiolab 6000CDT transport.

Reviewing a cable – and a mains cable at that – at this price point, you might be forgiven in thinking that only perfection of performance could possibly be the result.

You’d be sadly wrong on that assumption, I’m afraid.

The problem with high-end hi-fi kit is that expectations race upwards.

So even minor issues are amplified into major problems. After all, if you are spending over £800 on a single cable then you really should expect to receive some pretty special noises from it.

And that sense that all is not well in the state of Denmark is what you get from some cables I could mention out there, I’m afraid.

Price is not an automatic indicator of performance in hi-fi. Which is why I’m still in a job.

Tellurium Q, on the other hand, seems to have found ‘the answer’ in terms of its cable designs.

I can’t remember when I last gave the company a bad review.

And it’s not for the want of trying. I really have tried to nit pick the company’s cables because I’ve actually been bored with showering them with superlatives. “Oh come on! Really?

There must be an issue here somewhere?” Try as I might, I have real problems. It doesn’t help my grizzled reviewer reputation, let me tell you.

The company has hit on a special formula with its cable production that I have major problems in faulting.

This Black II mains cable is, I’m afraid, no exception to that deeply troubling situation. It sounds lovely.

What I sometimes hear from mains cables of this value is a restriction in the frequency spectrum.

There just isn’t enough width for all of the information to transfer from the grooves to your ears. I hear that on this track from the plucked electric guitar strings backed by a strummed acoustic. The Black II though offered a wide vista in the frequency spectrum that not only allowed both instruments to fully express themselves but produced just enough extra space to add reverb to both guitars.

The piano which followed soon after also sounded ‘true’ and ‘real’ via the Black IIs.

That is, it sounded grounded. It sounded like a large wooden box.

Which is what it is, essentially.

There was weight behind each strike of the piano strings and a sense of mass.

Now, this is not a rock track yet the orchestra should still be producing a foundational bass to keep that forward motion on track.

The Black II cables certainly provided that effect, adding size and impetus to the music and allowing the fragile vocals and strings to glide over the top. I then moved to New Order.

This test was interesting for those of you considering and wondering about upgrading your – quite possibly already high quality – mains cable. I’ve been living with the older, original Blue mains cable from Tellurium Q on my Benchmark DAC for a while now and an excellent cable it is too.

Really though, the leap in sonic quality after adding the Black II to it was just immense.

The Benchmark purred out music. I mean this stuff just oozed like fine chocolate from the speakers.

The quality was just wonderful. The Peter Hook bass guitar performance was a piece of art in and of itself.

It swayed, it crunched, it noodled away to itself, it was isolated and it roamed free within the mix while the lead vocal was now sitting in a 3D space that added a new sense of realism.

The lowering of the noise floor was almost disconcerting, I have to say.

Listening to the Tellurium Q Black II mains cables is akin to kicking off a pair of tight shoes after a long day at work. It’s a blessed relief.

The music flowed easily and without any strain.

Mids were expansive and free flowing.

Bass offered a sense of power without having to strut.

Treble showed that fragility could be naturalistic and not pinching.