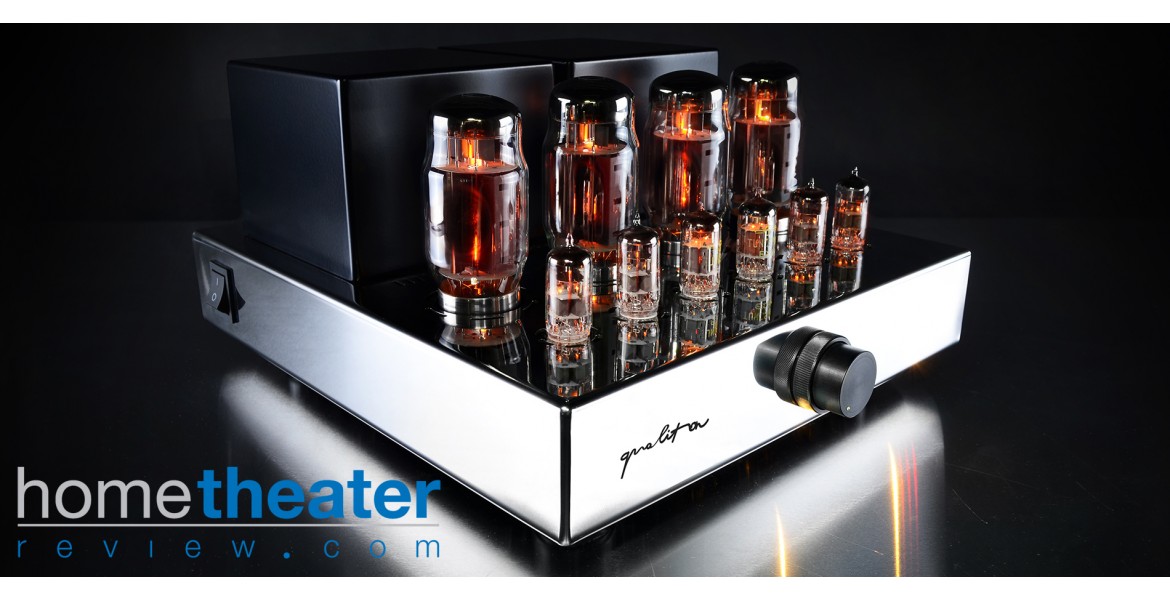 Integrated amplifiers are a great way to set up a high performing two-channel music system, often achieving most if not all of the sonic benefits of separate components while saving on separate component cost, interconnect cables, space, and of course cutting one power cable out of the equation. Additionally, the benefit of perfect component matching of the preamplifier to the amplifier, by the manufacturer, should not be overlooked. Most integrated amps, though, are solid state, and as of late I've been gravitating more and more toward tubes, especially in light of (relatively) recent advancements in technology, manufacturing, and availability. Simply put, tube components have never been easier to own than they are right now.

Audio_Hungary_Qualiton_A50i_internal.jpgPut those two great tastes together and you have the Qualiton Integrated Amplifier A50i ($7,500) by Audio Hungary, a relatively new player on the consumer audio scene whose owner and executive director of design, Lazlo Fabian, is a physicist with a passion for great sound. The A50i, the premier product of Audio Hungary line up, is a pure Class A integrated amplifier with reported harmonic distortion of less than 0.75% (measured at 1kHz at full power), and a frequency response of 30Hz to 100kHz

According to Audio Hungary, no expense was spared in the part selection, design, or construction of the A50i. The output transformers are of the toroid type and manufactured in-house and tuned to both 4-Ohm and 8-Ohm nominal loads. In terms of design, the A50i features a centrally located volume control and input selector, with an outer ring that controls input selection, while the inner knob controls volume. There are four analog audio inputs, three of which are unbalanced RCA, while one is balanced mini XLR. A set of mini to full-sized XLR patch cables is included, making it easy to connect to a balanced source straight out of the box. Audio_Hungary_Qualiton_A50i_integrated_amp_iso.jpgThe A50i relies on two Tungsram ECC83 tubes for the input stage, with four E88CC tubes driving voltage and four KT120 pentodes for power output amplification. To take the pain out of the tube amplifier ownership experience, a feature I see more and more on tube components these days is auto bias.

The A50i has its version, which monitors the output current of all four KT 120 output tubes and adjusts them to a preset value, ensuring all output tubes are operating equally. The unit's casework and layout contribute to its stunning appearance: A single sheet of highly polished stainless steel is folded into a five-sided case, open only on its underside. A matching removable bottom cover of the same material provides hidden access to its innards. The tube compliment is laid out in a symmetrical pattern directly in front of the massive toroidal transformers.

The result is a 14-inch wide, 16-inch deep, 8.25-inch high unit with no visible screws. At 55 pounds, the A50i is beefy, to be sure, but that heft contributes to the air of quality. An included wireless remote, made to match the amplifier's aesthetic, controls volume and mute functions. The Qualiton installed easily in my dedicated listening room, and was primarily paired with the now discontinued Vienna Acoustic Schnberg towers.

The bulk of my testing was via Tidal by way of an Oppo BDP-105 connected to the A50i through the balanced inputs. To test the amplifier's general characteristics, I played a familiar song from Maroon 5, "Sunday Morning." Immediately I noticed full front-to-back pinpoint imaging, along with a broad soundstage, making it easy to locate instruments and vocals within the image. On several occasions, it sounded if certain instruments were coming from outside my listening area. Adam Levine's lyrics projected naturally across my room and had a glowing quality that floated within my listening space. Lower volume levels maintained most of the amplifiers sonic signature without closing down bass or dynamic range. The voice of Esperanza Spalding, especially on the song "Unconditional Love," displayed an earthy character with more three-dimensionality than with my previously installed Rotel RC 1590 and RB-1590 stack.

While this may not be the best amplifier to compare to the A50i, it is what I had available to experience a side-by-side comparison. However, the RB-1590's 350 watts per channel did give it an advantage in some respects, especially in terms of bass slam. Regardless, there was a live quality with the A50i, similar to what one would hear while attending a concert at a small venue. To sum it up, Esperanza's broad vocal range had a rich warmth that was impressive and addicting. I was fortunate to have an additional set of speakers on hand--the Signature 3 from QLN--which provided an opportunity to hear how the A50i plays with a less sensitive speaker (87dB vs. 91dB sensitivity for the Schnberg towers).

I revisited Esperanza's "Unconditional Love" and noticed that musicians were still brilliantly painted in their positions within my room, and were easily identifiable, while Esperanza's voice floated in front with just the right amount of forwardness. With Maroon 5's "Sunday Morning," the level of imaging and vocal accuracy was maintained, but I noticed some enhanced tonal accuracy as compared with the Schnbergs.

After an extended period of living with and listening to the A50i, I noticed what is best described as small improvements over a broad range of areas, which summed up to create a staggering difference overall. To put the Qualiton A50i to the test in more of a brute-force way, I cued up "Back in Black" from AC/DC's album of the same name. While some would argue that tube amps are for more refined music, my tastes are broad, and I never know what the mood brings, so any amplifier in my system needs to stand up to whatever the occasion brings. Thankfully, the A50i delivered. The amp maintained the grit and energy of Brian Johnson's raspy voice, and struggled not in the slightest with the song's driving bass. There was no indication of distortion, but I did notice some loss of energy at the very bottom end, which had more to do with the QLN Signature 3's 42Hz low frequency response, not the A50i's 30Hz -3dB point.

The A50i operates in pure Class A up to 50 watts per channel with a 50 percent power reserve. The amp features toroidal output transformers manufactured in-house, and is the result of a spare-no-expense design philosophy from top to bottom. The casework features high-end fit and finish, with a gorgeous polished stainless-steel chassis and no visible screws. The A50i incorporates a proprietary auto bias circuit that keeps all output amplification tubes operating equally, eliminating the need for manual bias adjustment while extending the life of the pentodes. The A50i can accommodate both 4-Ohm and 8-Ohm nominal loads by way of specific speaker outputs on the rear panel.

The A50i is strictly a linear pentode amplifier with no ability to operate in triode mode, which seems to be a trend in tube amplifier design in the last few years. The A50i does not have a bad-tube indicator, as does some of its competition. The tube cover detracts from the overall appearance of the amp.

If you're not yet a tube amplifier enthusiast, you may be surprised to know that there are many tube electronic manufacturers creating integrated amplifiers. However, the field narrows when limiting the comparison to Class A output amplifiers. While we could debate the merits of both Class A and AB amplifiers, in my experience Class A wins every time. To keep the comparison relevant, I am limiting contenders to just a few Class A output designs. The French manufacturer Jadis has its I50 integrated, which is also rated at 50 watts per channel and employs KT150 output tubes. Like the A50i, the Jadis includes auto bias. The I50 has one additional feature as compared with the A50i: a USB digital input allowing a computer or digital output source to connect directly. I have mixed emotions about combining legacy tube nostalgia with continually evolving digital technology, because at some point, the digital connectivity becomes antiquated.

The Jadis I50 is an excellent example of this: Its digital-to-analog converter maxes out at 48kHz/16-bit. Currently, my preference is to have this functionality separate. At $11,495, the I50 is also pricier than the A50i, but not so much so as to keep it out of consideration. The Rogers EHF-100 MK 2 is a yet another fine Class A integrated amp rated at 65 watts per channel with four KT-88 pentodes. All inputs are unbalanced, whereas the A50i does have one balanced input. The EHF-100 MK 2 is made in America--New York to be specific--and also features point-to-point wiring, with the added benefit of all military specification components. The EHF-100 MK 2, like the Qualiton, has an auto bias feature, which the manufacturer claims extends the life of tubes and allows for single tube replacement, as opposed to changing the full set. With a retail price of $8,000, its value is right in line with the A50i. The overall aeronautical appearance of the EHF-MHK MK 2 is not quite as dressy as the A50i, but still ultra cool.

The Ayon Spirit III Gen 4 ($6,900) from Austria is a user-selectable Triode and Pentode Class A amplifier. In its latest iteration, the Spirit III with KT150 pentodes offers 65 watts per channel in Pentode mode and 40 watts per channel in Triode mode. Also, like the Qualiton, the Ayon has auto bias, which in this case includes an onboard computer that detects bad tubes via a digital display on the rear panel and an LED indicator on the front panel. The fit, finish, and overall styling are stunning, but different from the A50i.

The Qualiton A50i proved to be an incredibly satisfying integrated amplifier during my time with it, especially due to its agility and fidelity in the midrange and upper frequencies, which shined equally on vocals and instruments alike. Coupled with a significant amount of bass slam that belies its rated power, these qualities allowed me to enjoy any genre I threw at the A50i, from rock to classical to jazz. The more time I spent with the Qualiton A50i, the more I wanted to add it as the centerpiece of my full-time rig, if only my budget would allow for it. If you're a believer in Class A tube output like I am, the Qualiton A50i offers a nice combination of aesthetic design and performance, along with the ability to drive less sensitive speakers, which makes it a robust and versatile choice for virtually any tube-based two-channel system.