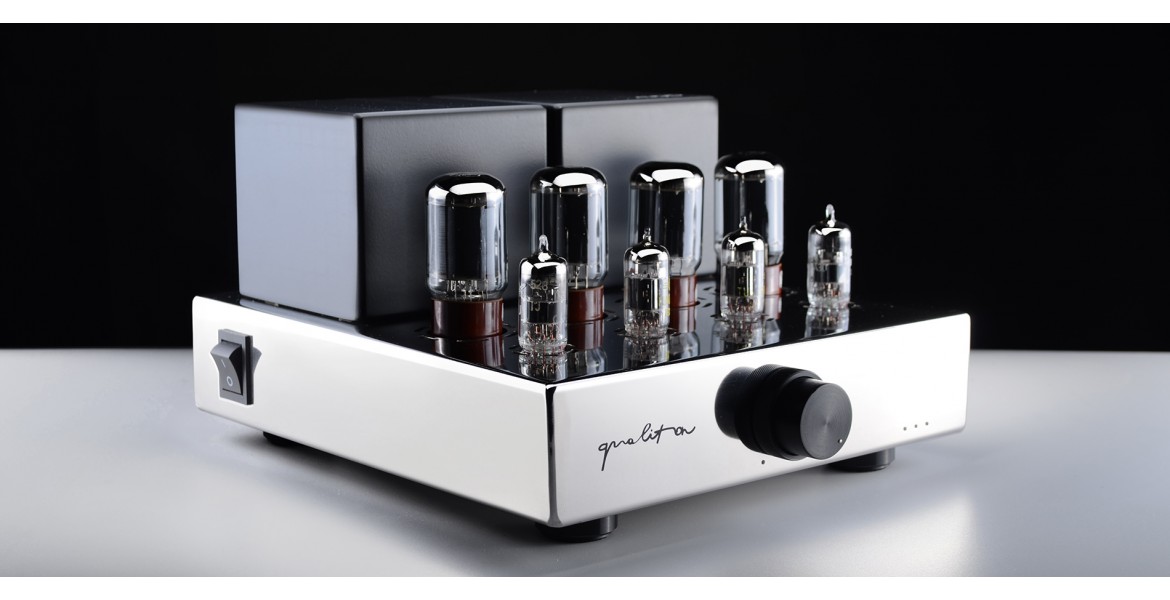 Mark Sossa is the only guy in audio that I know of who has a quote from Martin Luther on his webpage, “Next to the word of God, the noble art of music is the greatest treasure in the world.” This a quote that I whole-heartedly agree with. Mark owns Well Pleased AV, a distribution firm committed to the art of high-fidelity audio reproduction. Mark says he wants to offer some of the finest performing high-end equipment for the money from around the world. He imports electronics from Angstrom Audio Labs, Aqua Acoustic Quality, Clones, Innous, Linnenberg, and Qualiton. He also imports speakers from QLN and Rethm. The amp I’m reviewing here is the Qualiton A20i.

Qualiton is a brand owned by Audio Hungary, who has been in business since 2012. Product Description Audio Hungary says the Qualiton brand’s goal is more than just to produce the simplest possible circuit design. They believe that a circuit should be made to have wide bandwidth, linearity, low distortion, and a healthy power output. They want the Qualiton amps to be “no-compromise” products that are not priced that way. For example, their transformers are designed and wound in-house because they don’t want to compromise on quality. Mark shipped the Qualiton A20i to me in California, and it arrived doubled-boxed. The boxes were very sturdy, and the amp inside was very well packed. The first thing I saw was the heavy and nice-looking remote. Then, after removing the plastic covering the amp, I removed the tube cage to expose the tubes and the shining chrome body.

The A20i is Qualiton’s entry-level integrated amplifier. Personally, I wish more amps were the size of this amp. Yes, it is compact, but not so much as to look small. It produces 20 watts per channel of classic push-pull Class A tubed power. The amp I reviewed had four Tung-Sol 5881 tubes, two Tesla E88CC tubes, and two Tungsram ECC83 tubes. The outputs at the rear panel can be connected to 8 Ω nominal impedance speakers. The design of the output transformers of the power amp enables it to connect the amp with 4 Ω nominal impedance speakers as well. This does require an adjustment that is described in the technical datasheet. On the front panel, the volume control potentiometer and the input selector rotary switch are connected to the same shaft. There are LED indicators informing about the actual state of the amp on the front panel. The power indicator turns from red to white when the amp is ready to use. The amp is manufactured of solid 1.5 mm thick, polished stainless steel.

System Used for this Review

I removed the Pass Labs XA30.8 from my reference system and replaced it with the A20i. The amp was driving my Teresonic XRs. The source was my AMG V12 turntable, AMG V12 Turbo tonearm, and the DS Audio Master1 optical cartridge. All of the cables were from High Fidelity Cables.

So when I begin to audition the A20i, there were a few things that just jumped out at me. The first thing I noticed was how right and musical this amp sounds. The next thing was something that everybody who heard it commented on, how recorded plucked strings sound so real that they take on a lifelike quality. Guitars, harps, basses, cellos, harpsichords and even to some extent pianos, all sounded more real than I had ever heard them sound in my room. Another first impression was the superb vertical soundstaging. The amp has an uncanny way of letting you hear things at different heights as well as left and right in relationship to each other and space. What I can also tell you about the A20i is how well it lets you in on the textures and harmonics of music; how the sounds decay, how the music blooms and the emotions of real music. It’s about experiencing the sounds and feelings of music in a way that enables you to overcome the electronic listening experience. To me, the A20i conveys a seamless continuity of the instruments in their space. The end result is an amp that lets you listen to music and often forget the equipment. I was also really pleased with the bass of the A20i, especially from a 20-watt tube amp. The sound of drums, acoustic and electric basses had a good impact. These instruments had air and natural, realistic warmth to the bass. Not only did it allow you to hear this air and warmth without even the slightest hint of boom, looseness or hangover in the bass or midbass. This characteristic sound of bass instruments was carried all the way up into the upper mid-bass. The sound was quick with fast attacks followed by beautiful full decay that lets you hear different layers of the timber of the instruments. I think this is part of what enables this amp to play plucked strings with such realism. I want to state again that this amp has a bass with real impact and with the speed of the best transistor amps that I have ever heard without the over-tightness of many of them.

It comes close to having the bloom, warmth, and air of SET amps. While the midrange was just a little less immediate and a little warmer sounding than the best Wavac EC300B or my Pass Labs XA30.8, it still came close, a little more like sitting in row M than in row E if you were at a concert. The truth is, there are a lot of people who prefer this sound, and I can understand why. Don’t think for a minute that I’m saying this amp was not involving; it was. The midrange of the A20i has a way of just letting you relax and listen to music. I found it very hard to take notes when doing the review because before I knew it, I had taken off my glasses and was just enjoying listening. Voices also had good weight and mass to them.

I felt as if there was someone singing and not just a voice floating in air. This is very important to me; if a system can’t get the human voice right, it’s a deal-breaker. Emotional involvement is the most important thing about music to me, and here the A20i did not disappoint. Lastly, the top end was another place where the A20i really excelled. The A20i’s top end was open, sweet and just beautiful to listen to. It enabled the music to come to life in a way that just sparkled with realism. While the top end was very extended, it never sounded analytical or etched. If you have read many of my reviews, you know that I had rather talk about scale, depth, and space than pinpoint imaging or how exciting it is to hear a voice or an instrument coming from outside of the speakers. The reason for this is that when I go to hear live music, which I do often, I seldom hear that kind of stage or pinpoint imaging.

In fact, as I have mentioned before, the live event often sounds more like a good mono recording. I should say that I do not find this the be true with a symphony orchestra, the one place I clearly hear a really wide and deep stage in real life. Again, here the A20i gives you all of this. I was pleased with space around and even within instruments. I could also easily hear the textures of the music and feel the passion of the musicians. I could also hear the swell; for example as a horn gets louder. As I mentioned earlier, the A20i does a nice job of letting you hear things up and down in the soundstage.

One of my favorite cellists is Janos Starker, and I put on the LP Bach: 6 Cello Suites. This is one of the most beautiful recordings of a cello that I have ever heard. It can also be insightful to listen to. The A20i lets you hear this performance with all of its emotion, and there’s plenty of emotion with this LP. The cello was warm, beautiful and quick with a great sense of breath and space around and within it. It conveyed this warmth and life without a hint of overhang. or even the slightest amount of boominess. The emotions I experienced as the bow is slowly pulled across the strings were intense. I could hear the layers and textures of the tones each string made as the bow passed over them. Almost everyone loves the Ella and Louis album. On cut 2, “Isn’t This a Lovely Day” with the A20i, I could hear the beauty of Ella’s voice and the gravely power of Satchmo’s.

The voices were very prominent, and the horn had a good bite without getting bright. The overall emotion of this album was to want to just listen and listen. The Elvis is Back album has Elvis’ version of “Fever” on it. This cut will tell you if a system is all about slam and tightness or if it’s about emotion, music, and feelings. With the A20i in my system, it was definitely all about the musical and emotional experience. It doesn’t just play the attack of the drums and the bass, but it also lets you hear the decay and the reverb of those instruments. With this amp, I could hear enough spatial cues to hear how close Elvis is to the mike. It brings me back to something I said earlier; this is just a fundamentally musical amp.

I noticed that I forgot to mention the A20i sounds more powerful than most 20-watt amps I have heard. Another thing I think I should mention is that while I am mostly a vinyl lover, I think this amp brings out the best of a very good digital source as well. Some might say that means it is a forgiving amp, but I’d rather say that somehow it lets you hear the best of either source as long as it is a good musical source. I want to thank Mark of Well Pleased AV for importing the Qualiton line to the US. I think the A20i, regardless of its price, would be a great choice for any speaker that is over 88 db efficient. There are few tube amps of this quality at this price. Highly recommended!