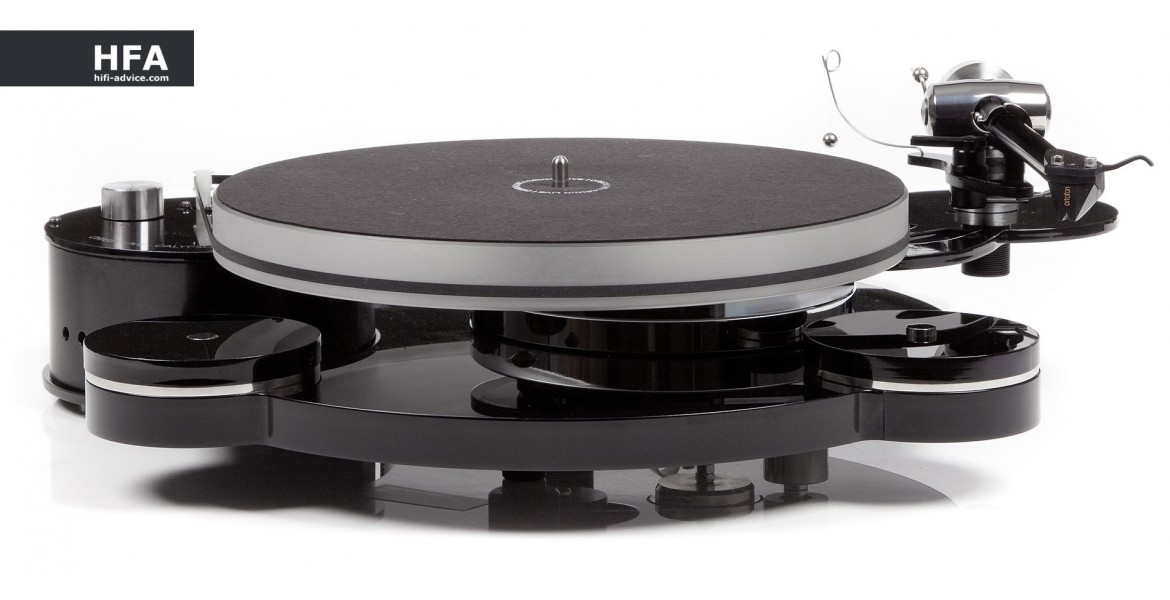 Regular readers may have spotted it in my system as early as May this year: the beautiful Origin Live Calypso Mk4. You might wonder what took me so long. Well, only moments after hearing the reviews sample I knew that it was something very special and I had to have one. Between this materializing and my finding the time to properly review it, quite some time passed, but I put it to good use! Funnily enough, the initial motivation for reviewing this turntable was that I was reviewing the costly ViRa Aidas Rainbow MC cartridge and I wanted to use it in a player more worthy than my stable of 40+ years old Thorens turntables.

After having obtained such great results with the Origin Live Onyx tonearm in a refurbished Thorens TD160B and having read fabulous reviews of various Origin Live turntables, I got in touch with Mark Baker and explained my situation to him. He was more than happy to supply a review sample and he also told me that, after hearing it, I would likely not want to let it go anymore. I was more than intrigued and, boy, how right he was!

In discussing the ideal configuration with Mark, we came to a combination that might seem unusual but which actually works splendidly. The basis is formed by the ~2500-euro Calypso Mk4 deck is one step up from the entry-level model but in its most recent incarnation. Mated with it is the ~2100-euro Illustrious tonearm which is positioned near the upper end of the mid-level section. Further, the standard Calypso platter is substituted for the ~770-euro Upgrade Multi-Layer Platter.

To top it off, the ~667-euro Silver Hybrid tone-arm cable is also added. As I had reservations about potentially not liking the “silver”-aspect of this cable, the standard copper “Upgrade” cable was also added. But as it would later turn out, I really needn’t have worried. The total cost the turntable in this configuration sans cartridge is approximately 6000 euro, depending on the UK Pound exchange rate. Not pocket change but certainly also not much for what’s offered and it is most definitely a far cry from what some brands dare ask for their turntables.

Above and below: Multi-Layer platter, consisting of 4 layers of different materials, or 3 layers if you do not count the upper cork/rubber mat. To use an arm that costs almost as much as the deck may seem counter-intuitive but as Mark explained, this would provide the best performance for the total cost. Taking a more upscale deck as the basis and using a lower-end arm would actually be less ideal for the performance. This would not be the first subject on which Mark would turn out to have ideas that deviate from the more established norm, but as I discovered some of the turntable’s peculiarities and experimented with alternatives, it turned out he was right, every step of the way.

At this point, I actually think that he is one of the very few designers who actually investigate all the aspects of turntable engineering and carefully re-evaluate everything with respect to the sonic end result. For the Origin Live turntables, Mark uses whatever solution that sounds best, not the one that accepted engineering knowledge dictates as the best solution.

All of the Origin Live turntables have a very unique construction. There is no sub-chassis in the traditional sense, but the platters are also not as rigidly coupled as with traditional mass drives. Of course, the arm has a rigid connection to the platter’s bearing and the distance between these two opponents is fixed. But it is done in a clever way that does allow a small and controlled amount of movement in other directions. It also allows a subtle springiness in the vertical plane. But fear not: it’s not at all comparable to Thorens or Linn turntable behavior. The Origin Live Calypso turntable is super-steady which makes precisely cueing the arm so much easier than with the aforementioned springy sub-platter designs.

The arm plate is mounted to the main chassis in the middle, allowing the bearing on one end and arm board on the other end to “float” ever so slightly. Above: the silver ring is where the arm plate is mounted, note the slits around it that further prevent an overly tight construction. Incidentally, the manual makes a point of setting the height-adjustable feet such that they are never fully tightened against the main chassis for the best sound.

The subtle springiness is achieved by means of partially overlapping layers of metal and acrylic material. Together, they make up the player’s chassis and arm plate, which are coupled in different positions so as to create something slightly similar to a car’s rear-wheel leaf springs. But I hasten to add that this resemblance is only visual. In use, the platter sits entirely still and nothing bounces about. What this particular coupling method does achieve is the avoidance of choking the music into something overly technical as it so often happens with super-rigid turntables, and even with high-end models.

If you think of a typical Rega turntable, these are famous for their pacing, and rightfully so, but they accomplish this at the expense of a significant reduction in fluidity, smoothness, refinement, air, and most importantly, the lyrical aspects which I often refer to as musical flow. If you simply clamp everything together very tightly on a single board, you enable fast transfer of energy. This results in the pacy sound of such turntables but you also make it easy for all the other vibrations to mess up the sound. Sub-chassis turntables typically behave very differently because their spring system effectively decouples the platter and tonearm from vibrations in a hopefully carefully adjusted frequency range.

The downside of such turntables is pretty much always a reduction in solidity, bass slam, and drive. This is, of course, over-simplifying the matter but my aim for this article is only to bring across how the Origin Live turntables are positioned in-between the two more common extremes.

The bearing is precision-made but unlike the bearings of pretty much all competitors’ designs, this one has an intentionally loose fit. As Mark explained, it is not too difficult to make a bearing to extremely tight tolerances that fits with absolutely no play but in listening tests, it became clear that these do not sound as good as his looser-fitting design. As Mark also explained, the play that you can feel when wiggling it around by hand does not relate to the stability that is created when the well is filled with oil and the platter is turning. When in motion, the rotation is completely stable but, again, without impeding the musical flow and choking the life out of the music as it can happen with some extremely over-engineered designs. The Illustrious arm is something special, too. Made from a combination of materials it does not have the common gimbal bearing nor an unipivot but a dual-pivot to combine the effortless and free-flowing musical behavior of unipivot designs with the operational stability, full-bodied sound, and bass solidity of gimbal designs. The motor pod contains a very smoothly and quietly running Swiss DC motor and a Light Speed Control circuit. As the Origin Live literature reads: “The ideal way to overcome speed drift is to control the speed of the platter itself rather than the motor. Direct drive decks are renowned for their consistent speed.” But, from personal experience, I know that DD systems introduce their own problems and often make for a “nervous” sound with shorter sustain and decay than with good belt-driven turntables. The Light Speed circuit measures the time it takes between turns using a reflective strip on the underside of the platter and very smoothly adjusting the speed accordingly.

As per the official specs, this system achieves a wow and flutter of only 0.04% which is on par with the best DD turntables. The best part of this circuit, perhaps, is that it guarantees the accuracy regardless of belt wear, motor age, pod position, and temperature, meaning that you won’t have to worry about any of these factors. The pulley, incidentally, is made of nylon which is much harder to work with than metal. Here, again, the genius of Mark Baker is evident as he is aware that a higher degree of visual perfection can be achieved with metal but the nylon simply sounds better and so that is what he uses.

I’ve really only touched the surface of the many facets of this turntable’s construction but, if interested, do have a look at the Origin Live website where all this and much more is outlined in great detail. It’s also worth checking for the many advisory sections, for instance containing articles regarding common misconceptions, guides for turntable calibration, and a very complete section on cartridge selection. Above: initial setup on one end of the room and using Kroma Audio Carmen loudspeakers Above and below: later setup on the other end of the room and using both Kroma Audio Carmen as well as Martin Logan ESL15A loudspeakers System Context

For this review, I used two different cartridges and two different phono stages. First, the Denon DL-304 MC cartridge was fitted. This is a cartridge that I know very well and have a long history with. I still have one of these myself and so do two of my audio buddies who kindly loaned theirs to me to enable a comfortable direct comparison. One of these DL-304’s has seen very little use and that’s the one that went into the Origin Live player, but not before I had compared it to the others and confirmed that they all sound good.

The other turntables were the Thorens TD160-Super and the TD125-II. After completing these comparisons, out went the Denon DL-304 and in came the ViRa Aidas Rainbow MC cartridge. This one has previously done service in a Thorens TD160B with Origin Live Onyx arm and so it also made for good comparison material.

Above and below: Calypso with Anthem STR pre/power amps. The turntable sounded great both on the Artesania Exoteryc rack as well as on the Artesania Modular rack but different. The former allowed it to sound most transparent and precise while the latter maximized the bass slam and the tonal richness in the midrange. The initial phono stage was the Benz Lukaschek PP-1 which was later replaced with the CH Precision P1, in both cases via the Ayon Stealth preamp. Besides my resident electronics, I also used the Calypso with various other components that happened to be on review, such as the Anthem STR preamp and power amp and a complete Zesto tube system.