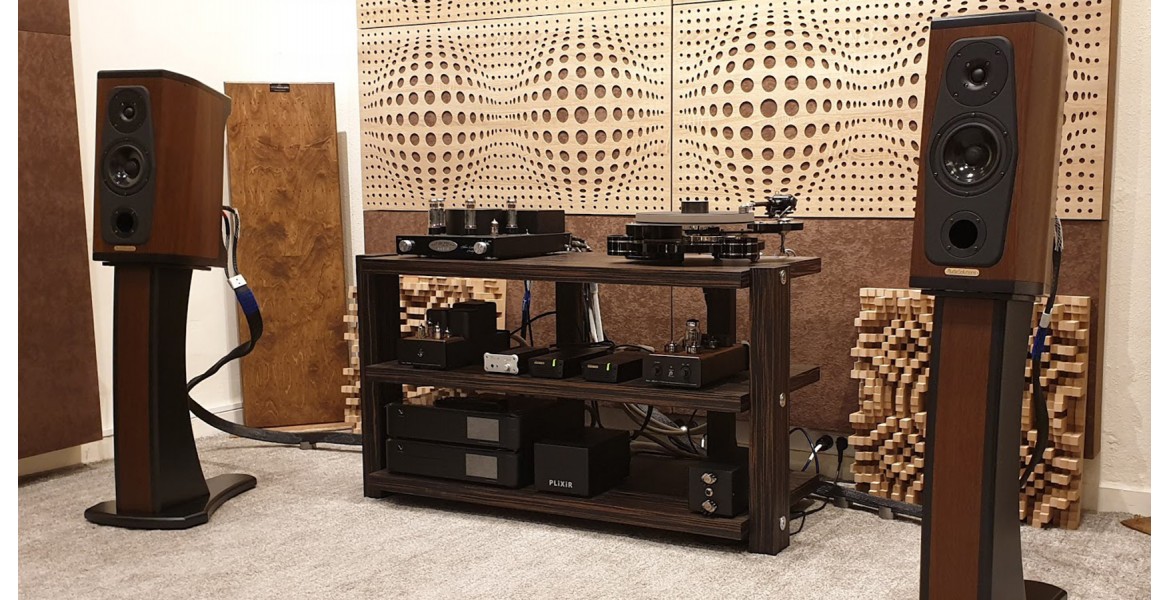 Fezz Audio Silver Luna PrestigeTube EL34 Integrated Amplifier Review
If you’ve already heard of Fezz Audio from Poland you have probably been dabbling online in tubes and affordable, integrated audiophile tube amps. If you have actually not heard of the company, now it’s time to do so, as Fezz Audio has struck a distribution deal in Greece with Chameleon Audio. Fezz is not a startup, the company was founded seven years ago and, together with its sister company specializing in quality transformers, have since completed several implementations specializing in higher quality toroidals. The company also offers a comprehensive range of amplifiers (always tubed with 300B,KT88 and more variations), noted for their impressive value-for-money, that have been regularly featured in European Trade Shows during the last two years. The Silver Luna Prestige integrated amplifier is based on the well-established Electroharmonix EL34 tubes and three toroidal transformers, providing power supply and output stages, a departure from the established route of integrated EI transformer designs. The advantages and disadvantages of this particular design will be analyzed in depth below. The combination of toroidal transformers and tubes reminded us of an older Velleman model, the KT4040, a short-lived kit amplifier that managed to make its mark as being something “different” – and rightly so. The Prestige version of the amplifier reviewed here uses two 6N2P preamp tubes and four Electroharmonix EL34 output tubes, delivering a 35 watt push-pull implementation power in AB1 class. The amplifier also features automatic tube biasing, a welcome addition negating the need for manual frequent check & adjustments, while also extending the life of the – often neglected for extended periods of time – output tubes. The amplifier has three inputs, Bluetooth compatible transports (for mobile phones, tablets, laptops, pc / MACs) incorporating a digital to analog converter, as well as 8Ω & 4Ω speaker outputs. Also provided are a pentode/tetrode selector switch and also the ability to switch between 6N2P and 12AX7 preamp tubes in order to further calibrate the amplifier’s response to your particular audio setup

Admittedly, a large percentage of audiophile demand centers around amplifiers in the sub three thousand euros price range, or simply seeks the “best value for money” products, depending on their personal taste and speaker configuration. At one thousand eight hundred and fifty Euros, this Fezz is probably the best affordable contender from what we have heard so far in 2019, with a set of features that direct competitors can hardly match. Read below to see why.

Four EL34EH output tubes in tetrode or pentode operation and two 6N2P cooperates perfectly. Beware to be shocked… the tube-unknown P.R.a.T. just entered the room (together with the EL34s glorious midrange and VERY extended highs) !

Auditions…. From the first minutes of our test it was clear that the Fezz was an exception to the rule; the dynamic range of the amplifier as well the handling of all frequency bands in such a precise and controllable manner was unlike any integrated or EL34 tube amp we have ever heard. Especially when taking into consideration that the main speaker used for the test – AudioSolutions’ Rhapsody model 60, an easy to drive speaker but limited to a sensitivity of 86db/m – showed no signs of fatigue. Throughout our test the Fezz confirmed our initial impressions of being able to drive at high indoor volumes without any noticeable fatigue and possessing a dynamic range and control that simply cannot be found in any EL34- driven tube amp. It is also hard to believe that the amplifier is rated at just thirty-five watts and not twice as much! Also remarkable was the overall ‘quietness’ of the amplifier, without any audible hum or buzz coming from the different test speakers like ProAcs & Reference 3A (with sensitivity ratings ranging from 86db to 94db) nor any annoying hiss from the tweeter even standing merely one meter away from the speaker.

The first half hour of our test really flew by, in a way that one would expect only from much higher priced hybrid amps. Lower frequencies were present yet controlled, and without compromising the amplifier’s dynamic range or transparency, as demonstrated when listening to symphonic works, jazz and rock music. The Fezz Silver Luna Prestige manages to enhance any type of musical listening experience with natural tube warmth and rich harmonic content in stark contrast to most affordable push-pull amps that tend to over emphasize low end response to the detriment of other sonic frequencies.The main reason for Fezz’s ability to stand above any integrated design – in its price range – from the past decade lies in the fact that the amplifier manages to simultaneously offer a healthy dose of properly proportioned ‘tube’ midrange frequencies as well as rich, yet controlled, lows. By not over-warming the ‘palette’, the amplifier succeeds in projecting its own transparent personality – even when dealing with exaggerated, boomy mixes – to the point that, at times, one forgets that Silver Luna is actually not one of the more exotic hybrid offerings costing many more thousands of Euros. Sounds too good to be true, but that is really the case. The harmonic content always remains bright and vibrant, natural and crystal clear with impressively pure high and very high frequency projection. More strikingly, however, the upper and lower ends of the frequency spectrum possess a remarkable range, speed and information without sacrificing tube amp “aura” and sound interpretation, a highly sought-after feature among audiophiles. For further testing, we auditioned the Fezz Silver Luna Prestige – in tetrode mode – through three albums that we often use in our reviews, in order to fully explore its tonal traits and characteristics in actual use:

Brian Bromberg – Wood. This album gave us the chance to assess how the amplifier handles both low and very low frequencies, natural instruments and timbres, as well as upper range harmonics. Also the speed of harmonic ‘reflections’ of the acoustic recorded double bass, as well. The Fezz delivered a clear, fast and articulate interpretation, which is highly unusual for its price tag. It should also be noted that there wasn’t any need for richer lows – the AudioSolutions was suddenly transformed into its larger sibling, a floorstanding speaker with two mid-woofers. Naturally, no ‘overhang’ notes and extra thickness were to be expected.

John Abercrombie – The Third Quartet. Perfect display of dynamics and micro-dynamics expression from the amp here as well, with no apparent tiredness or stress in medium volumes. The tone was natural and descriptive to a satisfactory degree while maintaining its pulse and nerve, without adversely affecting tonal cohesion. In direct comparison with Jadis’s integrated amp (Orchestra Ref. KT88, Gold Lion version), the differences between the two models were easy to detect. The latter prefers to seduce the listener by sacrificing range at both ends of the audio spectrum and open-up both the horizontal and the vertical axis of the aural “scene and image” adding richness, while the Silver Luna Prestige, on the other hand, retains extreme control, speed and added detail, providing a more realistic highlight of every recorded nuance on par with the lovely midrange liquidity of EL34.

Romero – Duente.The presence of guitar and vocals as well as the overall speed and tonal detail in this superb production, exceeds the limits of most amplifiers. However, this is hardly the case here as the Fezz’s performance is simply stunning. One can only reject the Silver Luna Prestige if they have very specific listening preferences and taste in terms of tube ‘voicing’ & ‘coloring’, or prefer a more invasive approach from their tube amplifiers, as many other circuits and implementations do. In order to be able to judge though, extensive auditions of more prestigious pre-power amps (incorporating EL34 tubes to be fair) or much more expensive integrated ones is actually required. By choosing this delicate aural path between tubes and transistors, the Fezz Silver Luna has deservedly gained our “special new talent” award. Using the built-in digital to analog converter and Bluetooth reception for Spotify and Tidal program applications, the Fezz Silver Luna Prestige’s performance was less satisfactory than that of SoTM and Metrum digital devices, which was to be expected. However, for a little extra – but reasonable – cost (150€ for both dac + bluetooth) we can’t imagine anything more appropriate for those who want to use the integrated at all times through their mobile phone.

All that the Silver Luna Prestige requires from its end user is a relatively easy-to-drive, quality speaker and source.

Given the simplification of the output tube maintenance thanks to automatic bias as well as its remarkable speed and sonic detail delivery across the whole band, the amplifier managed to distinguish itself from the mass, approaching the performance of the best hybrids we have heard to date.

The treble frequency range and overall timbre, the gentle but clear mid frequencies, the so-called “P.R.a.T.” (Pace / Rhythm and Timing) aspect, which is markedly better than that of most top quality integrated EL34 amplifiers of the past and the continuous flow of aural information without any signs of fatigue are to be congratulated. At first glance we did not expect this type of performance from the Fezz Silver Luna, but looks can be deceiving!