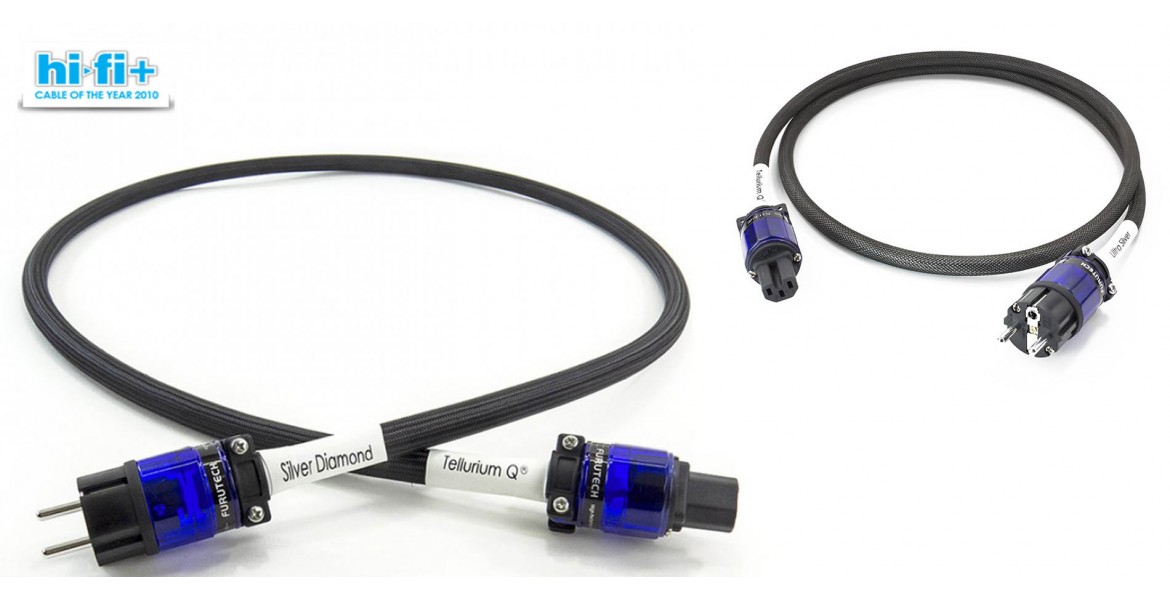 If cables are a controversial topic in audio, then power cables raise that controversy to the nth power. The idea that a signal cable can make a difference in audio is sometimes stretching the credulity-gland of some audiophiles, but the idea that a power cord makes a significant difference too is a struggle.

Worse, when that power cord is backed up by almost no background information in support, and instead places reliance on ‘go out and listen to the damn thing!’, those who take an objective line on audio are fit to burst, screaming “it’s all subjective!” Tellurium Q ultimately argues for an observational approach to audio and does so right across its ranges.

Rather than back up its products with either ‘fluffy’ claims or controversial calls to materials and architecture, it posits that its Blue, Black, Silver and Diamond ranges represent a ‘good’, ‘better’, ‘best’, and, er, ‘bestest’ performance. It develops cables through observational listening, and those who do the same observational listening in demonstrationwill come to the same conclusions.

Silver and Silver Diamond represent the ‘best’ and ‘bestest’ power cords in the Tellurium Q line, and in terms of things outside of direct observation, that’s about as much as there is to say here. Those of us paid by the word might not take to kindly to that approach, in part because the “here comes the science bit” in a review begins to look very sparse.

Moreover, it means we have to do the job instead of ‘phone it in’ and ‘pad it out.’ On the other hand, in an audio sector where objectivity often takes a back seat to a spot of Star Trek, having no “science bit” to speak of is something of a refreshing change.

So, from a materials science perspective, the Silver Power uses conductors made of ‘metal’, surrounded by a dielectric made of ‘stuff’ and wrapped in a black braid made of ‘material’. Meanwhile, Silver Diamond is made of similar

TELLURIUM Q SILVER/SILVER DIAMOND“The nature of those innovations, like all things Tellurium Q, remain a secret.”

things and is slightly thicker. Both are terminated in robust Furutech connectors at both ends and have a white heat-shrink identifier telling you what the brand is at one end and what type of cable you are using at the other. The two power cords are more flexible than previous Tellurium Q power cords thanks to innovations by the company’s R&D team.

However, the nature of those innovations, like all things Tellurium Q, remain a secret, and the company’s R&D team have all taken a vow of silence. It might not be the most significant ‘sell’ in audio, but a power cable adds nothing to a system’s sound; it can only take from the overall performance.

The better the power cord, the less it detracts from the component itelf. As you can only reduce compromises with a power cord goes some way to explain why so many place great importance on the power cord as core to a system’s sound.

Tellurium Q’s Silver’s take on this ‘first do no harm’ approach focuses on the midrange clarity and drive. While frequency extension – particularly in the bass – is excellent, the first aspect you notice when listening with Silver is the clarity of voices, the expressiveness of midrange detail and a more pronounced ‘in the room’ energy to the sound. Tellurium Q could be hoist by its own petard here, as it tries to eschew the base notion that cables that use silver conductors sound bright, only then to call its cable ‘Silver’.

But this Silver is neither bright nor tarnished. The Gold Standard for midrange clarity tests are female voices, but instead, view Silver from a nuanced piano recording perspective. I’m usually reluctant to use ‘audiophile’ recordings, but Nojima Plays Liszt [Reference Recordings] highlighted what Silver does so well. It’s not just the playing dynamics (although these are impressive) or the accuracy of tone. It’s that it conveys the sense of an instrument as a complex musical entity in its own right; the sound of hammers hitting strings, of the resonance of the piano itself and the little taps of a nail on a key.

Over-excited versions of a real piano are standard fare in audio, but here they join forces to make a gestalt piano sound. Silver Diamond takes this midrange clarity and energy and builds significantly on it. There’s more than a touch of Tellurium Q’s ‘Statement’ cable to Silver Diamond, and that means more space around the instruments, more frequency extension (top and bottom, but with that, yet more of that energyand clarity of Silver), and more dynamic range let through.

And with that comes a caveat of sorts; Silver is a little more forgiving toward what it feeds. Suppose your component isn’t quite as open-sounding at the top-end or as dynamic as its contemporaries. In that case, the Silver will be more accommodating, where Silver Diamond detracts less from the power feed, and that can show up inconsistencies in the source or amplifier. Interestingly, this is not just an exercise in expense; I used Silver Diamond to affect significantly a Leben integrated amplifier that cost only slightly more than the cable itself.

But if all your audio ducks are in a row, Silver Diamond can make an already singing system sound like it just got Aretha and the Monteverdi Choir stepping up to the microphone. These are top-flight power cords that are resolving and ‘get out of the way’ enough to let the music sound really good. Silver is perhaps the more universal of the two, but in places where Silver Diamond can shine.

While that is dangerously close to using the name to define the product – something Tellurium Q is abjectly trying not to do – it’s hard not to make ‘diamond’ analogies when Silver Diamond makes a system sparkle.