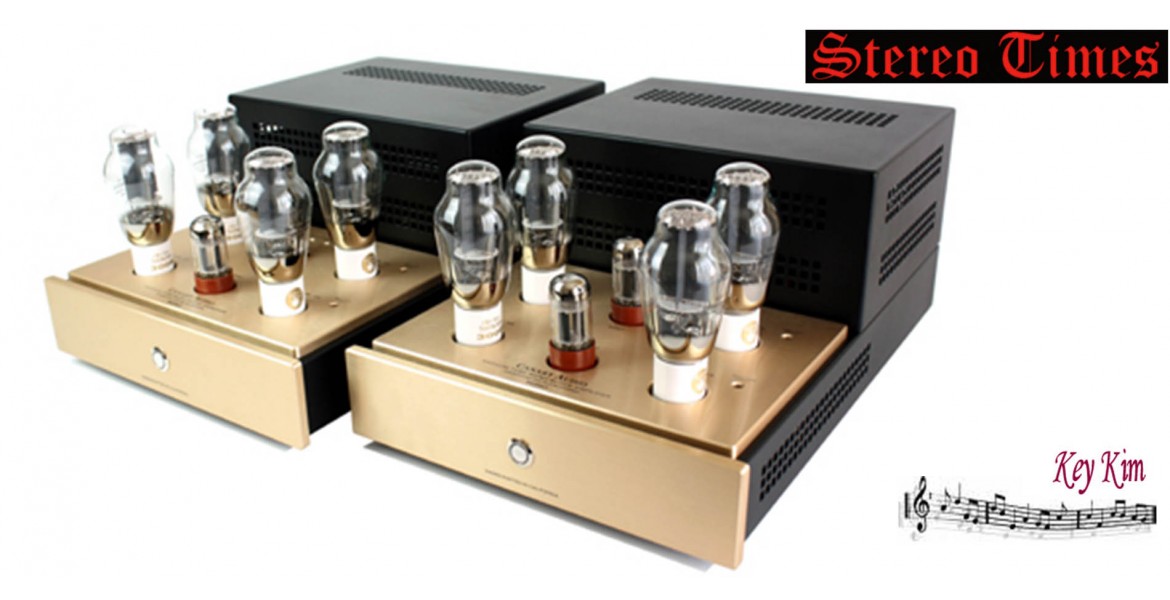 I've reviewed many tube amplifiers from SET to Push-Pull in the past several years using various types of output tubes. I've reviewed everything from the legendary Audio Note Kondo Ongaku amplifier to a more approachable and great-sounding Decware Zen Mystery series amplifier.

There's something about tubes that's magical! I love them! Of course, they must be done right like anything else. The Western Electric (WE) 300B tube is regarded in the audiophile world as a virtual audio goddess; it is the most linear audio-frequency amplifying device ever created and the most durable. The WE 300B is a Directly Heated power tube with a four-pin base; it was introduced in 1938 by Western Electric to amplify telephone signals.

Eventually, audiophiles started to use the 300B on its excellent linearity, low noise, and good reliability. 300Bs were often used in single-ended triode (SET) amplifiers producing about 8-watts or in a push-pull pair with twenty watts. Unfortunately, the WE 300B never got much popularity in mainstream hi-fi from the 50s to the 70s due to the inception of high power tubes in tetrode and pentode.

The 300B tube amplifiers always intrigued me, but I wanted one with more power than the usual eight watts. I wanted an amplifier with power and authority to control and drive dynamic loudspeakers - not just high-sensitivity horns.

I contacted Canary Audio hoping to review the M330 monoblock amplifier. Fortunately, Tony Laurel, US rep for Canary Audio said, "Yes" He'd send me a pair. I waited about three weeks to get the M330. The M330 sounded fabulous right off the bat. After I had the M330 in my system for about two months, I still only averaged a few hours.

As I logged in more hours, the M330 opened up, offering up glimpses of how good it is. The M330 was pure, transparent, and delicate sounding with good power and authority. I wondered to myself, "What would a bigger M350 with double the power have in store for me?" Laurel informed me that M350 would be as delicate as the M330 and even a touch improved in sonics with more power, authority, and more headroom.

Canary Audio is an American company from California which manufactures a full line of high-end audio electronics and accessories. The company was founded in 1996 and is celebrating its 25th anniversary this year.

They must be doing something right for all these years. The company remains low-key and keeps a low profile. I've attended many audio trade shows throughout the years, but I have never seen them or any advertisement for their products.

But, when I asked around in the industry about Canary Audio, I heard nothing but positive things about the company. Starting from day one, Canary Audio focused on designing and building 300 B-based amplifiers. They believe that the 300B is the best-sounding tube. I remember about ten years ago that my first glimpse of Canary Audio was at the CES in a Western Electric room featuring their amplifier and preamplifier.

It was their OEM project, and they also did OEM projects for TriangleART.

The M350 monoblock amplifier uses four 300B output tubes per channel in a push-pull configuration to produce a glorious 50 watts of pure Class-A triode magic. The M350 is a classic push-pull design. Like all Canary Audio 300B amplifiers, it comes without the 300B tubes.

The M350 comes with a pair of Tung-Sol 6SN7 triode tubes for input and driver tubes. The M350 uses a solid-state rectifier rather than a tube rectifier. The solid-state rectifier has much less voltage drop and can deliver more current more quickly, meaning that it will make the amplifier sound tighter and punchier with a more solid low end.

Like all their amplifiers, "the M350 uses AC for the power supply of the 300B filament." Many other brands use DC to reduce noise, but the problem is that doing DC takes the magic out of this legendary tube. But with proper shielding and routing of wires, Canary Audio was able to achieve a quiet operation with superior sound in every regard". A choke is also used for power filtering. The choke, power transformer, and output transformer are custom made in the USA using the highest-grade Japanese laminations. The resistors used are metal film, flameproof with 2% tolerance.

The capacitors are audio grade made by Mallory, Panasonic, and ELNA. The main capacitors are the AudioCap Theta with polypropylene film, tin foil, and gold-plated OFHC leads. The M350 uses very minimal feedback just to reduce distortion and to maintain linear operation. I remember that Audio Note Kondo also uses minimal feedback in their design.Biasing the amplifiers is easy, and you only need to have a digital multimeter and a slotted screwdriver.

Biasing should be done when installing the 300B tubes, and it needs to be checked every two to three months to make sure that it is still within the normal range (I rechecked the bias about every and it 60 days and made the needed adjustment). The M350's are beautifully designed and constructed meticulously and hand-made in the USA. All of their products, including the M350s, are built using the best and highest quality components.

The elegant-looking champagne gold faceplate and the first half of the top plate are inch-thick brushed aluminum with a power button in the center. The four 300Bs are seated on the champagne gold plate, the front half of the real estate, along with the two 6SN7s for input and the driver tubes. The rear half of the real estate contains the power and output transformers covered in a perforated steel cage behind the 300Bs. The back of the M350 features custom-made gold plated 5-way binding posts (4 and 8 Ohms) and a fused IEC and single-ended RCA inputs.

As I said, my review pair arrived equipped with Genalex Gold Lion PX 300B tubes. I was too excited to finally get to hear the 300B amplifier in my system. Laurel told me that the M350 had been tested in the factory to ensure quality sound and workmanship.

However, he recommended a 200-hour break-in period. But From the very first notes, I knew that the Canary Audio was something special. The M350 conveyed music magically. Voices and instruments sounded captivating with an exceptional timbre purity that was intoxicating. The midrange magic of the 300B was undeniable; it was pure, open, revealing, and colorful, while the treble was extended and airy with sweetness.

The music, no matter the source or genre, flowed effortlessly. Usually, I would let a component burn-in for about a month or so, and then I would start to listen carefully. Not with the M350. My enjoyment started right away, and it only got better as I logged in more hours. It took me few months to fully burn-in the M350. I rolled in the NOS JAN 5692 RCA red base input tubes and the NOS JAN CBS-Hytron brown base driver tubes replacing the Tung-Sol 6SN7GTB tubes, and ended liking them more than the Tung-Sol 6SN7GTSs.

It took the M350 up a notch; it was more natural and organic sounding. Owning tube gear can be very rewarding and fun. You can improve and change the sound to your taste just by rolling tubes, assuming that you have well-designed tube gear.

The RCA and the CBS-Hytron had just the right combination of extension, air, transparency, rich harmonic structure, and tonal color. The M350 rendered music with more realism; it reproduced richer harmonic and tonal shadings truthfulness with a lot of air and detail.

It was just more refined. In my experience, if the amplifier is designed well, it will sound good regardless of the type of output tube that is used. However, I've used many amplifiers with different families of tubes, and what you hear will be influenced by the type and make of the tubes you're using. Paired with the Thrax Dionysos preamp, the M350 produced the rich harmonic palette expected from tubes while it projected an excellent transparent window and purity.

The naturalness of the instruments' rendering was close to what I hear at live performances. The M350 doesn't sound "sweet" or "romantic"; instead, it sounds pure, almost with a see-through immediacy.The portrayal of classical music, jazz, and vocals was outstanding.

Listening to concertos and symphonies was exceptionally rewarding. The M350's effect on my system's spatial performances was outstanding. I put on one of my favorites, Dvorak's Cello Concerto for Cello and Orchestra in B minor, op. 104 (DG 139044) performed by the master, Mstislav Rostropovich, and the maestro, Herbert Von Karajan, conducting Berliner Philharmoniker.

The M350 produced an enormous size and scale on a soundstage with realistic dynamic swings. From pianissimo to fortissimo, the system handled it all with remarkable realism. It rendered a three-dimensional and picturesque staging one could hardly have imagined. Enhanced was both the soundstage and the sense of space with nary a hint of exaggeration whatsoever. The M350 can capture the full sweetness, warmth, and complexity of the orchestra dynamic range.

Its portrayal of individual images is exemplary and reveals layers of small detail and nuance, and I have heard with far more expensive gear. I could see deep into the hall and notice instruments at the back of the stage just as vividly as those in the front. My Conspiracy loudspeakers simply disappeared.

Next, I played Rossini's Sonate a Quattro performed by Ensemble Explorations (HMC901776). How is it possible that Rossini composed these beautiful works when he was only twelve years old? The strings were lovely throughout this recording; they were very transparent, revealing layers of sufficient detail and nuance that were emotionally involving.

Strings take on a more sophisticated feel that imbues far more realism. The M350 performs magically naturally and organically. The midrange was rich and textured without sounding too warm. The treble was extended and reproduced cleanly with the right amount of sheen on the strings.

One weekend I was in the mood for female voices and put on Melody Gardot from her outstanding recording of Your Heart is as Black as Night from her "My One And Only Thrill" (Verve B002563-02). The M350 put me in a hypnotic state. It has an uncanny ability to transport music in an ethereal way.

I was stunned by the intense level of purity, immediacy, and solidity of her voice. I felt as though she was in the room. After reviewing many tube amplifiers in the past few years, I decided I like the Canary Audio M350 so much that I'm keeping these 300Bs as an addition to my new reference tube amplifier.

The M350's sonic consistency from top to bottom of the audio band was genuinely outstanding; it sings like a canary and has an uncanny ability to put me in my listening chair for hours at a time. It's that good! Playing all types of music genres, whether jazz, Classical, or vocals, the rewards were plentiful.