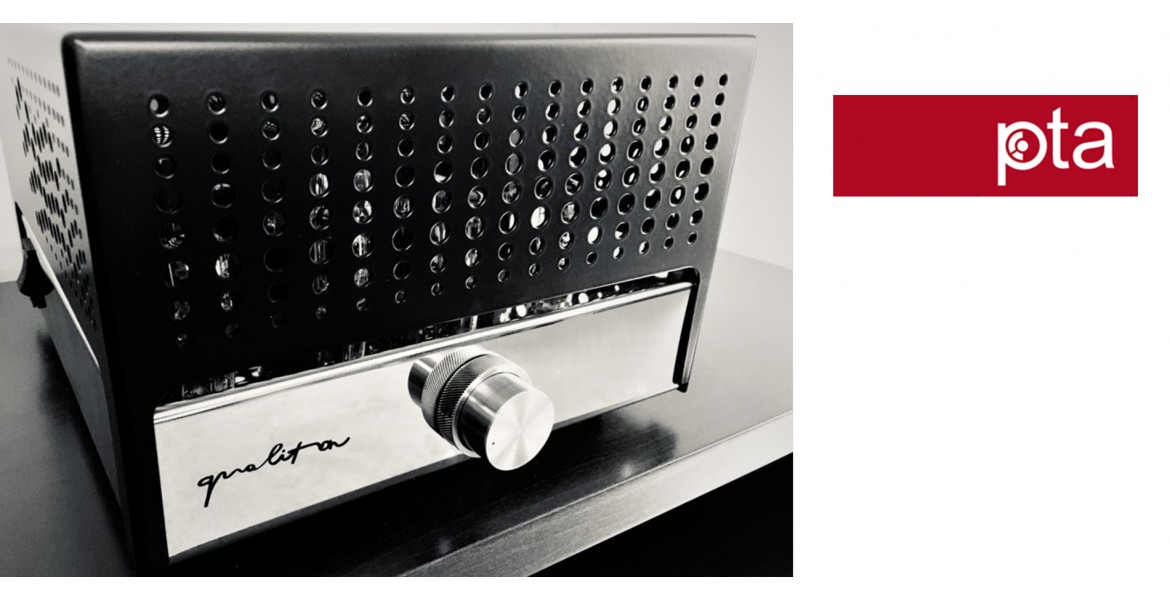 Human communication is a fickle thing.

Even languages like English have plenty of room for interpretations and inferences that are often misunderstood.

Scot Hull secured a sweet little tube amp for me to audition, the Audio Hungary.

The timing didn’t quite work out to use it with the Volti Razz which I think would be a great pairing, by the way.

But I did get to use this 28W/channel chrome gem with the efficient Living Voice OBX-RW3 loudspeakers. Surprisingly, it had no problems driving my Vandersteen Model 3s, but I digress.

I should explain what this amp is all about before jumping to the end.

Once upon a time in a land far away…

Audio Hungary has an interesting history.

The company has had several different names since its inception in the late 1940s.

They really came into the spotlight when, as Budapest Electroacoustic Factory (BEAG), they built the sound system for the 1980 Moscow Olympics. BEAG broke into smaller companies, one being Univox Ltd., before disbanding in the 1990s. Univox lived on as Univox Kft until 2014 when Audio Hungary Kft bought them.

In 2015 Audio Hungary Kft released their first in-house amplifier, the APX 200 based on knowledge from BEAG’s successful APX 100 amplifier.

Since that time they have been slowly expanding their product offerings and branching out into the international market. mark sossa well pleased av Stealth Mode Delivery Mark Sossa, of Well Pleased AV in Tysons Corner, VA sent over the Audio Hungary Qualiton A20i. Well Pleased AV is the North and South American distributor for Audio Hungary.

Mark sent the amp incognito in a Home Depot box that, despite several “fragile” stickers attached, looked like it had been drop-kicked a few times before delivery.

I was a bit concerned when I brought the box in and opened it up. Everything was well-packed with the original Audio Hungary doubled-boxed safely inside. remote control for the qualiton a20i So Shiny After extracting the much-heavier-than-it-looks Audio Hungary Qualiton A20i from the box, I pulled off the black cage to reveal a smallish shiny chrome integrated.

The A20i can be tapped for various loads, this one was set for an 8Ω tap.

The tube compliment puzzled me at first as the user manual mentioned tubes that at first glance appear to be identical.

The input tubes are two E88CC and two ECC83. Looking closer at the user manual I realized that the input tubes were from different manufacturers and that two were a matched pair, so take care in inserting the preamp tubes to make sure the right ones go in the right places.

The amplifier tubes were all the same, a quad-matched set of 5881s, so no worries about tube placement for the amp section.

The Audio Hungary Qualiton A20i has minimal front panel controls. It has a nice concentric knob on the front panel.

The outer ring switches between the three input sources and the protruding inner knob is for volume.

The A20i comes with a minimally featured chrome remote control with volume and mute.

Much like the parent A20i amplifier, the remote control has a heft that is closer to a brick than a typical remote control for a quality electronics component.

I mean you could break windows with the remote control.

All the inputs are located on the back panel behind the large chrome encased transformers.

Unbalanced RCA connections are the only input offerings.

Three of the speaker taps were aligned similarly, but the last post was rotated about 90⁰ compared to the others.

Functionally this didn’t affect anything, but it was a noticeable quality quirk.

The power cord and power button are in the left rear corner.

The amplifier is almost a perfect square and has a retro-industrial vibe that is actually pretty cool. On the front panel are a few LEDs.

One is right below the concentric knob.

It glows red while the amp is warming up and turns an orangish amber when the amp is ready to go.

The source LEDs are to the right of the volume control.

I was very confused by this as I kept playing around with different sources and carefully turning up the volume knob only to get the faintest hint of music at full power.

I decided to plug into the middle input source and figured it out what was going on, but its quirky.

I’m not sure if this is design as intended or an oopsy during assembly. binding posts for audio hungary

I was surprised how similar it sounded to the Audio Space Reference 3.1 I had been using.

The tubes were completely different, but that meaty midrange presence, slightly rolled-off highs, and just a touch of loose but ample bass were surprisingly similar.

The wattages between the two amps were also close at 21W for the Audio Space and 28W for the physically smaller, but almost the same weight, A20i.

The A20i is a true integrated with no built-in DAC or phono stage. There are no pre-outs, subwoofer outs, or amp-only inputs.

The Audio Hungary Qualiton is basic on features, but the sonics are where the focus is. I visited a friend and brought along the A20i.

He had never experienced a true low watt tube amp and we played around with a variety of gear for several hours.

At the end of the evening he emphatically stated, “Thanks Graig, now I want a tube amp!” I love how this hobby makes you realizes that you don’t know what you’re missing until you hear or experience it, and then you want more! So I believe someone is now on the hunt for a reasonably priced tube amp…

As with any gear the associated electronics make a big difference.

The Audio Hungary Qualiton A20i sounds good with both analog and digital gear.

I found my preferences between digital and analog to be unchanged when listening to this integrated amp.

It does both well without really giving a strong edge to either. I think it depends on what you want.

Do you like better presence and the sumpthin’ in the midrange of vinyl, or do you prefer the clarity and frequency extension of digital?

Digital is a bit less harsh while preserving all of the imaging cues around instruments.

Digital still has an edge and a bite, but with the Audio Hungary Qualiton A20i it was ever so smoothed just a hint.

Vinyl has a midrange bloom that delivers some of the best qualities of analog with good soundstage depth and that hanging-in-air sound you get with well setup systems, but with the rolled off highs cymbals loose sparkle and the timbre that adds realism. audioquest and cardas used with audio hungary qualiton a20i

So, what are our eastern block audio engineers sending you for $4995.00 MSRP?

The Audio Hungary Qualiton A20i is that type of amplifier that hits that price point above entry-level tube amps and below megabuck tube amps. Sonically, I think it lives up to its price point, delivering a solid tube experience. It definitely isn’t dry or analytical like some megabuck tube amps, but it also isn’t as syrupy as some tube amplifiers I’ve heard.

The Audio Hungary Qualiton strikes a good balance between these two extremes in my opinion.

The transformers and power supplies are powerful enough to drive a hungry inefficient speaker like the Vandersteen Model 3 with far more punch than I was expecting.

But as you would expect with any tube amp, I wouldn’t pair it with a load that has crazy impedance swings like a Wilson or a Magnepan. I enjoyed my time with the Audio Hungary Qualiton A20i and if I didn’t have the Audio Space in-house, I’d be very sad to have the Qualiton tube amplifier leave.

If you are looking for a tube amplifier in this price point, which is a fairly competitive price point for tube gear, I would recommend adding the Audio Hungary Qualiton A20i to your audition list.

t looks great, has a wonderful power supply, and is a solid performer sonically.

I know that Audio Hungary has some newer models being released soon.

Keep an eye out for more reviews in PTA in the near future.